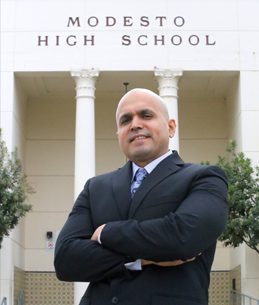 Jorge was born in Salinas, California to migrant farmworker parents who left Mexico in the early 1970s in search of a better life. His parents taught him the values of hard work and respect and the importance of education despite living in a poor and disadvantaged community.

Jorge became the first person in his family to graduate high school, and in 2000, he earned a Bachelor’s degree in Education from CSU Stanislaus. In 2009, he went on to earn a Master of Science in Educational Counseling with a Pupil Personnel Services Credential from the University of La Verne.

Mr. Perez has been employed by the Modesto City School District for the past 16 years, serving in both leadership and management positions. He is a former Director of the Department of Student, Parent & Community Support Services and has been instrumental in developing and implementing successful community outreach efforts and district-wide prevention/intervention support programs for students and parents.

Jorge has worked to develop, cultivate and sustain an extensive network of collaborative partnerships to build capacity and leverage and to expand more support services to students, parents and the community. He also serves on numerous boards and multicultural planning/steering committees. Jorge has received several local and national awards that recognize his value and work as a public servant and educator. Most recently, he decided to fulfill his ultimate dream and accepted an academic high school counselor position at Modesto High school.

Jorge and his wife Yvonne have been married for 24 years and have 4 children: Deztinee, 23; Maya, 16; Levi, 6; and Jaydan, 1. He always remembers his humble beginnings, his parents’ sacrifices, his personal life experiences and his faith, which together give him the drive to empower students and parents alike.