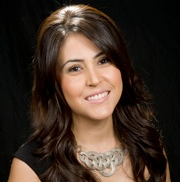 Claudia Ruiz is originally from Hermosillo, Sonora in Mexico, and moved to Earlimart, California in 1987.  She later moved to Fresno in 2004 to pursue a college degree at California State University, Fresno.

As a child she wanted to be a nurse, and was a pre-nursing student at College of the Sequoias in Visalia.  While taking her prerequisites at Fresno State she worked as an intern at Children’s Hospital Central California, where she read to and played with young cancer patients.  Ruiz also served as an atrium desk assistant at Fresno State’s University Courtyard, working the night shift. After changing her educational path, she graduated with a degree in Health Science with a Community Health option, and planned on being a health educator.  She interned at Planned Parenthood, assisting in teaching a weekly course to teenage mothers. In 2007 Ruiz started work with the City of Fresno’s PARCS Department.  She went on to be a computer lab technician at the Hinton Center, an after-school instructor for Fresno’s BEST program, and a case manager for Fresno County EOC’s Workforce Connection.

Ruiz is currently Chief of Staff to Council Member Clinton J. Olivier in the Seventh District at the City of Fresno.  Ruiz is very knowledgeable of city policy and constituent services.  She is currently pursuing a Masters in Public Administration from California State University, Fresno.

Ruiz strongly believes that much can be done to create a more beautiful and vibrant Fresno when government, advocacy and special interest groups work together with the public on realistic goals that benefit all.

I work in an office that represents some of the most affluent parts of the city and also some of the poorest. Effective, positive community change should be non-partisan – in the best interests of the community as a whole – not just what respective parties want to do; many times goals are lost in political debates. I feel it is essential to meet other professionals and learn about their points of view. I’m an immigrant from Mexico, and I wish my culture would encourage more civic engagement. So many here are undocumented or have parents who are undocumented, and the fear of government keeps them from being engaged civically. Immigrants should understand that there is power in their voice and that they can be heard. People are innately afraid of change; it’s a fear of the unknown.”