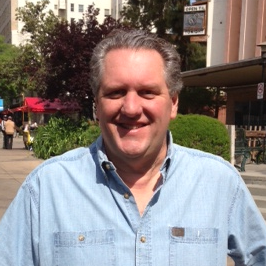 Craig Scharton is the owner of Peeve’s Public House & Local Market and is the CEO of Scharton Urban Development Strategies.  Peeve’s Public House features locally-sourced, seasonal food in a casual pub atmosphere.  The Local market is one of the first 100% local food markets in the country.  The Local Market carries only locally grown and locally made food.  SUDS was formed to organize downtown investment in anticipation of the re-opening of Fulton Street.

Craig Scharton was the Director of the Downtown and Community Revitalization Department for the City of Fresno.  During his career, he has served as a local elected official, a real estate entrepreneur, and as a non-profit executive director of two Main Street programs and the Central Valley Business Incubator.  He is a Lecturer for a course titled Urban Entrepreneurship, through Fresno State’s Lyles Center for Innovation and Entrepreneurship, and has an M.S. in Community Economic Development from Southern New Hampshire University.

Craig has attracted investors, been the general managing partner for 200,000 square feet of commercial space in downtown Fresno, secured millions of dollars of financing for entrepreneurs, and worked with hundreds of small businesses.  In 2002, he was elected by his peers to serve as the President of the California Main Street Alliance, representing the best downtown revitalization organizations in the state.

As a Fresno Councilman, Craig and the neighborhood developed the Tower District Specific Plan (Fresno’s first neighborhood conservation plan) and wrote and passed the 50% Shade Tree Ordinance.  He has been a speaker for the National Mail Street’s Annual Conference and for the Nation Trust for Historic Preservation.

While with the Central Valley Business Incubator, the organization opened two new facilities, the mixed-use Launching Pad and the Claude Laval Water and Energy Technology (WET) Incubator which serves water technology and clean energy startup companies.  During this time CVBI companies raised over $7 million in capital for member businesses, and CVBI increased its funding by over 50%.

Craig and his dog Peeve live in a partially restored 1925 bungalow in downtown Fresno’s Lowell neighborhood.  Craig enjoys gardening and has a 100% edible landscape.  Craig’s son Cole is an accountant with Baker Peterson and Franklin and his daughter in law Amanda is an accountant with Roland Roos Co., in Fresno.

I care most about downtown revitalization, neighborhood revitalization, economic development, local business, and food. I learned a lot as the Director of the Downtown and Community Revitalization department for the City of Fresno, and as a Fresno Councilman I helped create the Tower District Specific Plan (the first neighborhood conservation plan). Change takes informed leaders, an informed public, and a lot of perseverance. It is doubly hard because we don’t use good strategies, information, management principles, data, and communication tools effectively. I was the first president of the California Main Street Alliance, teach Urban Entrepreneurship, and live in a concentrated poverty neighborhood. And I’m a simple pub owner.”