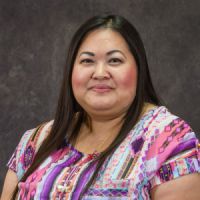 Maiyer Vang, is married to Kao Lee, has two, children McKenzie and Elijah Lee. She graduated from Fresno High School in 1999 and obtained a Bachelor of Arts in Liberal Studies from California State University, Fresno in 2005.

Maiyer is a multi-tasker, currently employed by Councilmember Blong Xiong for the City of Fresno in California. Her duties include, outreaching, advocacy and networking with community members in the City of Fresno, Merced, Stockton, Sacramento, Butte County, and other cities and states. In addition, she managed Council District’s Office, kept budget up to date and handled staff. Maiyer works with constituents requests, coordinates neighborhood meetings, she plans events and mediates between constituents and other City departments. One of the most notable events, she helped planned for six years was “Make a Difference Day”. At this event kids starting at age six, had the opportunity to play soccer at Chukchansi Park with their families. She made this event possible by finding sponsors, organizing schedules, and feeding from 2,500 to 4,000 people that attended the event.

Maiyer also was responsible and planned one of the largest funerals in the Central Valley. Where an estimated 65,000 people attended. There were people from different cities, states and counties who attended the late General Vang Pao’s funeral on February, 4 through February, 9 in 2011. Maiyer helped lobby with the General Vang Pao’s family to open the 1st Vang Pao’s Elementary School in the City of Fresno. The efforts of Maiyer and the Vang Family paid off as it was voted unanimously by the Fresno Unified School’s Board of Trustees on February 8, 2012 that the school be built. Vang Pao was opened on August 20, 2012, it was an pleasure for her to be a part of a magnificent journey. To see a man she believed in and respected so much, who helped hundreds of thousands Hmong refugees come to the United States of America be honored.

She also facilitates the Asian Pacific Islander Leadership Council meeting in Fresno and is a member of California Asian Pacific Women. Her experience includes working in various political campaigns as a Financial Consultant. She is involved with advocacy work, public relations, and served on various community committees on behalf of Councilmember Xiong. She is a supporter of educational, health care, affordable housing, and employment training opportunities to all regardless of age or race. Additionally, she has lead collaborative advocacy efforts from local to state, and federal level for immigrants, refugees, and New Americans.

Prior to working with the Councilmember, Maiyer served as a Job Retention, Case Manager with Fresno Center for New Americans’ (FCNA) a nonprofit organization that assists immigrants, refugees and new Americans to successfully transition into the community. She provided job retention to refugees from Thailand and Russia, helped them obtain employment and gave them the necessary tools to be self-sufficient and achieve the American dream. FCNA was where she found her passion in serving the community of Fresno.

Currently she is a Board Member, Fresno Economic Opportunities Commission (Fresno EOC). A non-profit founded in 1965 that is known to be one of the largest nonprofit Community Action Agencies in the United States. Fresno EOC has spent over four decades devoting in people, helping them become self-sufficient. Maiyer’s desire to give back to the community has led her to where she is now. Her plans for the future, is to get Southeast Asians’ more involved in the American Political system and advocate for the middle class and working families.