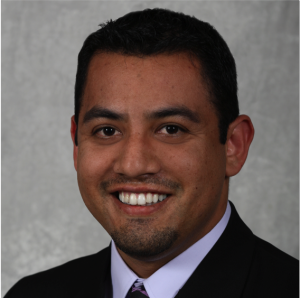 Mr. Arias is a native of Mendota, a rural agricultural community in western Fresno County where he and his family labored in the fields as farmworkers. After graduating from Mendota High School, Mr. Arias attended California State University, Fresno where he studied Criminology and Chicano Latino Studies.  While at CSU Fresno, he accepted a position with the U.S. House of Representatives where he worked as a district representative and legislative assistant to Congressman Calvin Dooley in both the Fresno and Washington D.C. offices.  During his time in Washington D.C., Mr. Arias established an immigration education program and staffed the bipartisan House Taskforce on Immigration Reform.

In 2005, upon completing his tenure in Washington D.C. with Congressman Dooley, Mr. Arias returned to his hometown in the Central Valley. Shortly after his arrival in 2006, he was appointed and subsequently elected as a trustee of the Mendota Unified School District.  As trustee, he assisted the leadership team in improving student achievement and facilities including the construction of a new middle school and the establishment of the Westside Institute of Technology, a vocational training enter for residents in rural western Fresno County. Additionally, he served as a State delegate to the California Democratic Party and acting president for the Mendota-Firebaugh Rotary Club.

Mr. Arias subsequently, accepted the role as Chief of Staff to Fresno City Council Member Blong Xiong. During which he initiated and implemented local, state, and federal initiatives related to the district and city. His duties also included participation in the city budget deliberations, economic development projects, and direct communications with elected officials, advocacy groups, lobbyists, and constituents on behalf of the City.

Since then, Mr. Arias has served in various senior roles within Fresno Unified School District including; Chief Information Officer, Executive Director of the Office of Constituent Services and Community and Family Services. Fresno Unified School District is the fourth largest school district in the State of California and the largest employer in the San Joaquin Valley. While in the district Mr. Arias has overseen several departments and special projects.

[quote]Education, economics, and improving our leadership pipeline for the Valley are what I care most about. Change is hard because the transition of power and influence to a new generation is never simple, especially if the new generation of represents a different social economic demographic. I believe my experiences in bridging the gap between institutional leaders and grass root organizations will be an asset to our network.”[/quote]