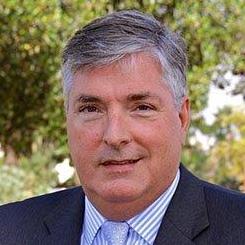 Hugh J. Ralston was recently appointed the president & CEO of the Fresno Regional Foundation, beginning in October.   FRF is the community foundation serving six counties across the central San Joaquin Valley – Madera, Merced, Mariposa, Kings, Tulare and Fresno.   Bordered by the Sierra Nevada Mountains and some of the most fertile agricultural land in the world, the foundation’s annual grantmaking exceeded $8 million in 2014. Total assets were $62 million.

Ralston’s most previous position was the president & CEO of the Ventura County Community Foundation, where the organization grew in assets by over $100 million in his eleven year tenure. Highlights of his work included the establishment of the VCCF Nonprofit Center, a 53,000 sq.ft. center for local nonprofit organizations owned by VCCF, expansion of the foundation’s Center for Nonprofit Leadership to a level that engaged 1 in 4 nonprofits in the region, and a series of program initiatives that expanded opportunities for local donors to work together to address key issues. These included a tenfold increase in scholarships for local students, expansion of efforts to engage local funders through the Ventura County Funders Forum, the Ventura County Together collaborative around basic needs, and initiatives with national and regional funders around expanding arts capacity (ArtsLIVE in Ventura County), strengthening opportunities of nursing (Partners in Nursing’s Future), deepening capacity for nontraditional organizations (Focus Funds), strengthening local nonprofit capacity, in addition to a series of locally focused funds, including the Fund for Farmworker Housing, the VC Veterans Fund, the Mental Health Initiative, the Freeze Fund and a youth initiative to expand opportunities for area youth to emerge from adolescence safely.

Prior to VCCF, Ralston served four years as the Executive Director of the Catholic Education Foundation in Los Angeles, providing support for inner city Catholic schools, and spent sixteen years as an international, corporate and private banker, working with Security Pacific in Los Angeles and New York and with JP Morgan in Los Angeles.   He is a third generation partner in a farming business, with properties in Santa Barbara, CA.

Ralston also has 20 years of experience as a board member for a number of California CBOs and educational institutions, with a focus on education, arts & culture, and philanthropic opportunities. Current board memberships include Scripps College in Claremont and the San Francisco Theological Seminary. Prior service included the Santa Barbara Museum of Art, the Community Arts Music Association, KDB Radio/SB, the Los Angeles Master Chorale, the Research Institute of Childrens Hospital Los Angeles, the Workforce Investment Board of Ventura County, Southern California Grantmakers, the League of California Community Foundations (where he served as its first treasurer), as well as the chair of the Society of Junior Fellows at the Huntington Library. He served recently as the president of the Community Foundations National Standards Board, a support organization of the Council on Foundations in Washington, D.C. that provides accreditation, where he participated in an update and revision of the national standards for US Community Foundations.

The descendant of a longstanding California agricultural family, Ralston is an avid gardener and singer, most recently with Ventura County based Los Robles Master Chorale. He has been active in Mastersingers USA, which won the male choral competition at the 2003 Eistedfodd, and a regular participant in the Berkshire Choral Festival and the Tallis Scholars Summer School. He is an ordained elder in the Presbyterian Church USA, and has been active in congregations in New York and California. His wife, Elizabeth, was most recently on the faculty of the Fashion Institute of Design & Merchandising in Los Angeles, and founder of her own landscape design business.   The Ralstons relocated to Fresno in October 2014.